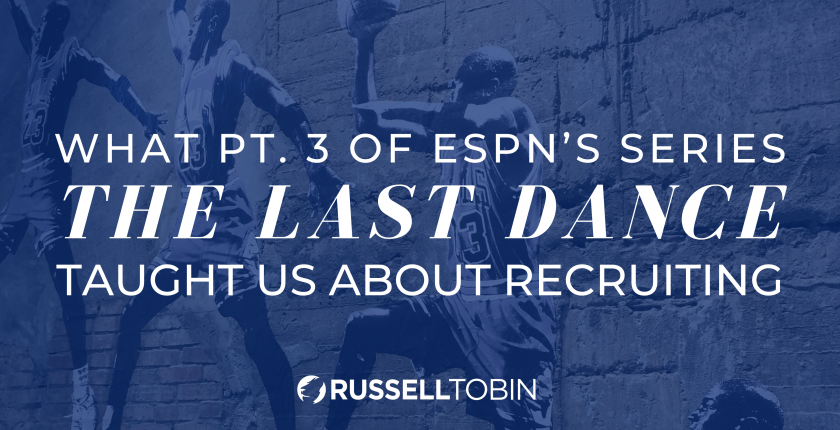 Like 5.9 million other people in the world, I tuned into “The Last Dance,” the long-anticipated Chicago Bulls/Michael Jordan documentary that aired on April 26, 2020, on ESPN.  As a basketball junkie, I can’t get enough of MJ footage, but if you really dive into the material, the 10-part series tells us so much about more than just basketball. Four episodes in and we have already learned a ton about running a business, especially how to hire and team building. As someone who has spent their entire career in sales, recruiting, or a combination of both, I could not help but draw parallels.

One man’s “trash” is another man’s treasure

In the basketball sense, I am referring to Dennis Rodman, who was spotlighted in the third episode as the eccentric but talented player who had trouble fitting in with his previous teams. Although he had issues off the court, he rejuvenated his career in Chicago, playing alongside Michael Jordan and Scottie Pippen. The tutelage of Phil Jackson certainly helped, as well, as they collectively let “Dennis be Dennis,” giving him the freedom that he needed mentally, all while trusting he would still produce at a high level.

Well, I don’t want to spoil anything here… but the Bulls won the title! For the third year in a row, nonetheless. They let Rodman go on a 48-hour vacation to Vegas, only to see him come back and outwork everyone else in practice, and which led to him helping the team win the last of their six championships all in Michael Jordan’s career.

What does this teach us about hiring/building sales teams?

I’m sure anyone who’s managed teams for long enough can think of someone they can relate this to: A talented but eccentric team member who might have a different way of doing things, but ultimately performs well and contributes greatly to the team as a whole.

While many of you might be thinking, “It’s not worth the hassle,” that might be the case in some circumstances. For those of you who don’t know,  Rodman was almost black listed from the league due to some of his antics on the San Antonio Spurs right before his debut start with the Chicago Bulls. But where most General Managers in the NBA saw Rodman as “too much trouble,” Jerry Krause (we’ll get to him in a bit) saw him as an inexpensive asset. Krause trusted that the Bulls’ culture and winning-ways would keep Rodman on the right track.

While it was a risk for Krause to take on Rodman,  it was a calculated gamble that he ended up winning big on. We often find that when some of our clients are looking for top talent, they can be scared away by hints at eccentricities. If an interviewee comes off that they might be “difficult to manage,” or shows signs of not getting along with previous direct reports or peers, they often times get written off and rejected. Now most of the time, that might be the right decision. But sales leaders and hiring managers in general should always keep an eye out for the folks who show promise and might just need a change of scenery to maximize their talents. Maybe in their last job their boss was a jerk who only had their own best interest at heart. Perhaps when they joined their last company, they were told one thing when they were hired and presented with a whole different set of job responsibilities. Or maybe the culture was toxic and bred a lot of negativity and selfish behavior. There are a million different reasons why people don’t stay with their last employer.

Sometimes the question “Well, if they were such a strong performer, then why did he/she get let go or leave on their own?” can be very misleading.

If you believe in your leadership team and the overall foundation of your company’s cultural,  don’t look past these candidates. They might be the missing “winning” piece you’ve been looking for. Just ask Michael Jordan if he would take Dennis Rodman as a teammate again. And at the end of the day, don’t we all want to be “like Mike?”?