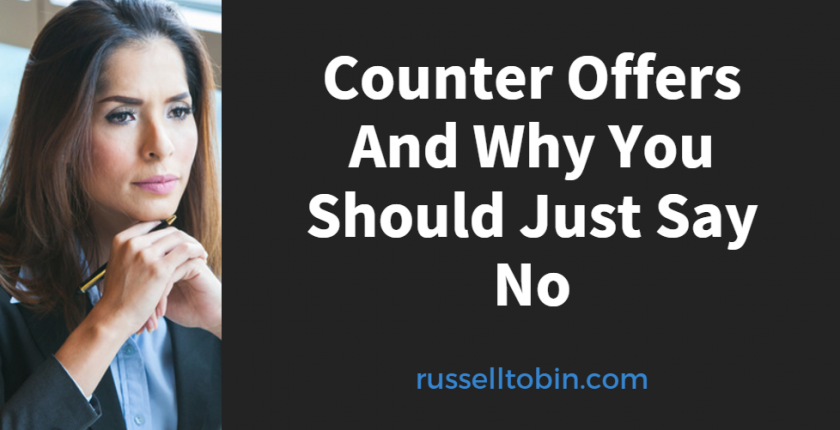 Counter Offers And Why You Should Just Say No

You get an offer at a new company and couldn’t be more excited.  When you go to resign, your boss asks, “How much did they offer you?” and the next day they present you with a bump on your salary to ensure that you stay.  What do you do? Most people feel great when they get a counter offer…It seems like your boss truly values you enough to give you more money.  But then why didn’t they give you that raise a month ago before you told them you got an offer elsewhere?

Your Reputation and Word Are All You Have – I had a candidate come to me who was incredibly unhappy in their current role– the environment was toxic, they were constantly getting yelled at and they desired a livelier environment. The candidate wanted to quit without another job lined up because they were THAT unhappy.  I got the candidate a job at a phenomenal, dynamic firm that had everything they were looking for– culture, team work, and the icing on the cake: a $10,000 increase in salary.  A week later, they call and tell me they ended up showing the new offer to their current boss, and in return, received a competitive counter offer, which the candidate ultimately accepted.  I advised the candidate on why this was not a good idea and emphasized the non-monetary reasons that made the work environment not ideal.  A couple months later, the candidate reached back out to me and guess what….The candidate was miserable.  They can’t go to the bathroom without being interrogated, a dentist appointment during work is completely out of the question because everyone thinks they’re interviewing. They’re unhappy more now than they were before the counter offer.  Six months after accepting the counter offer, the candidate left. When it came down to it, the money was great but it didn’t get rid of the other issues.  The bottom line is that it’s incredibly rare that a counteroffer is successful– usually because your initial reasons for wanting to leave were not about the money.  In the end you end up burning bridges; whether it is with your current company or the company that offered you the new job.  You’ll lose your reputation and be known as someone who doesn’t keep their word.

Why You Shouldn’t Accept the Counter Offer – Counter offers very rarely have a happy ending.  According to national surveys of employees that accept counter offers, 80% of those people will not be at their current employer in six months and 93% will not be there in 18 months’ time. When you vocalize or signal that you are unhappy, your every move will then be under a microscope after a counter offer is accepted since your boss will continue to wonder if you are still looking elsewhere.  Going to the bathroom, having a legitimate doctor’s appointment, all of these trivial things will become increasingly more difficult due to the doubt that was put into the boss’ head.  The employee’s commitment and loyalty is questioned and all credibility goes out the window.

The moral of the story is:

Think about what would change if you stayed and took the counter offer (besides receiving more money).  Go over all of the reasons you want to get a new job…Will they disappear once you take this counter offer?  Most likely not.  So, when your boss counter offers you more money, just say no.

Julia is a Senior Associate with the Direct Hire Administrative team at Russell Tobin assisting administrative professionals and executive assistants with their job hunt.

Connect on LinkedIn +
back to top

You can find out more about which cookies we are using or switch them off in settings.